Here’s a compilation of some really cool quotes

“When you stop chasing the wrong things you give the right things a chance to catch you.”

“Busyness serves as a kind of existential reassurance, a hedge against emptiness; obviously your life cannot possibly be silly or trivial or meaningless if you are so busy, completely booked, in demand every hour of the day.” – Tim Kreider

You will always be fond of me. I represent to you all the sins you never had the courage to commit. ~ Oscar Wilde

Reminder: you are either building a technology business or losing to one

“One of the advantages of being disorganised is that one is always having surprising discoveries.” — A A Milne

I spend a considerable time reading articles online, and quite a lot of them have a few lines that make you pause for a minute and think..The more you think about them, the more you want to think about them.  I really want to archive these lines/ statements/prophecies to refer to them as and when I feel like, thus this blog post.

On Long Term Vision: If everything you do needs to work on a three-year time horizon, then you’re competing against a lot of people. But if you’re willing to invest on a seven-year time horizon, you’re now competing against a fraction of those people, because very few companies are willing to do that. Just by lengthening the time horizon, you can engage in endeavors that you could never otherwise pursue. At Amazon we like things to work in five to seven years. We’re willing to plant seeds, let them grow—and we’re very stubborn. We say we’re stubborn on vision and flexible on details.Long-term market share is more important than short-term profits because without long-term market share there will be no long-term profits

the best customer service experience is when they never have to contact you.

Don’t worry if something you want to do will constrain you in the long term, because if you don’t get that initial core of users, there won’t be a long term. If you can just build something that you and your friends genuinely prefer to Google, you’re already about 10% of the way to an IPO, just as Facebook was (though they probably didn’t realize it) when they got all the Harvard undergrads.

Empirically, the way to do really big things seems to be to start with deceptively small things. Want to dominate microcomputer software? Start by writing a Basic interpreter for a machine with a few thousand users. Want to make the universal web site? Start by building a site for Harvard undergrads to stalk one another.

Empirically, it’s not just for other people that you need to start small. You need to for your own sake. Neither Bill Gates nor Mark Zuckerberg knew at first how big their companies were going to get. All they knew was that they were onto something. Maybe it’s a bad idea to have really big ambitions initially, because the bigger your ambition, the longer it’s going to take, and the further you project into the future, the more likely you’ll get it wrong.

I think the way to use these big ideas is not to try to identify a precise point in the future and then ask yourself how to get from here to there, like the popular image of a visionary. You’ll be better off if you operate like Columbus and just head in a general westerly direction. Don’t try to construct the future like a building, because your current blueprint is almost certainly mistaken. Start with something you know works, and when you expand, expand westward.

The popular image of the visionary is someone with a clear view of the future, but empirically it may be better to have a blurry one.

In Grandinetti’s view, book publishers—like executives in other media—are making the same mistake the railroad companies made more than a century ago: thinking they were in the train business rather than the transportation business. To thrive, he believes, publishers have to reimagine the book as multimedia entertainment. 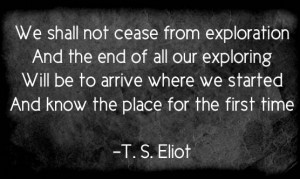 It’s been almost a month(shame on me) that mayank.name has been unavailable to a large extent and I couldn’t do enough to get it back up. Though I have a lot more to say about this and other things, I’d keep this post short and sweet and will get back to action with an elaborate one asap.

Till then, keep talking !!

While this definitely isn’t a new update it’s a useful one and I am not sure if many people are aware of it.

For those who didn’t know, Gmail now has a undo button which can prevent you from sending erroneous emails. The way it works is that Gmail holds up your email for about five seconds(or more?) before sending it and you can undo sending of email in that time window by clicking the undo button

But mind you this isn’t a default setting, you’ll have to work a bit to get this working. By default when you send an email you’ll be getting the same old message

To incorporate this change go to Gmail settings(right top) and go to the labs section.

Labs section is a collection of lots of new(and mostly useful) features that are in testing stage and haven’t been released for masses.  Look for the “Undo Send” feature there, enable it  and you are done.

Though the Gmail Blog says the time in which you can do an undo is 5 seconds I’ve found it to about 9 seconds when I tried to time it a couple of times.

So what do you think about this feature ? Useful  ? Not Useful ? Google seems to agree with what President Roosevelt said:

“We have nothing to fear but fear itself. And Chuck Norris.”

don’t believe me ? go to http://www.google.com, type find chuck
norris and press “I am feeling lucky” and try for yourself