It happened yet again. Facebook saw yet another meme apparently meant to promote ‘Breast Cancer Awareness‘. When I logged into Facebook day before yesterday I was unpleasantly surprised to see some female friends put statuses like these 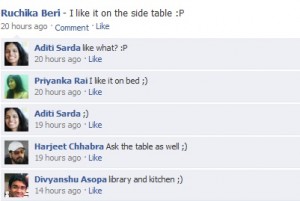 If you are a regular user of Facebook you might remember a similar meme that surfaced earlier this year. While this meme is apparently all about places where women would like to keep their *purse* and not where they’d like to *do it*, the last meme was about women sharing their *Bra Colour*. I’ll not get into the discuss if such memes actually help spread awareness about Breast Cancer or not but what interests me more is the the “how & why” of these memes.

One of the first Memes I encountered was during my early days of Blogging a few years back was probably “10 things you don’t know about me” or something similar. The sheer fact that a trend needs to grow viral in order to become a meme is an interesting thing and it is worth exploring what makes a meme a meme.

A meme is in a lot of ways like a viral (forward) email/sms as it has the essential elements required to sustain and grow itself. Going back to the ‘Made To Stick’ check list for an idea to spread, a meme should also have certain features for it to go viral. Ideally a meme should be

Memes are a win-win situation for most users and the platforms(or the causes?) they spread in with users getting something different to talk/show off and the platform seeing more activity. However as someone interested in marketing I wonder if brands can leverage the meme phenomenon.  Your thoughts?