The last time I met folks from Twitter was around 8-9 years ago. After a long gap the so called “Tweetup” happened again when a bunch of Twitter users met at a quaint restro-bar ‘Chateau De Pondicherry’, in Delhi on Saturday, 8th September.

The idea behind having a ‘Tweetup – Twitter User Meetup’ was to meet and get to know people in real that you interact with on Twitter and also to meet some new folks who are also Twitter users.

Tweetups were a rage globally in 2007-08 and continued to be popular for a few more years. Back then, power users (and later by companies & social media agencies) used to organise the events and promote them heavily online. Since Twitter was also gaining attention among media folks , such events also used to get coverage in Print media which further helped spread the word on Twitter.

It’s always great to meet folks you’ve only interacted with online, in person and make friends. The fact that such events are organised organically by the community is fascinating.

User Communities are a powerful force. In case of Twitter, one can argue that it’s because of users love for the platform and the powerful connections/networks that user built on it that Twitter could survive the 2007-2008 ‘fail whale’ days.

For the unfamiliar, Twitter was having massive issues in scaling their service between the end of 2007 and 2008. The service used to be give a lot of errors frequently and the error message (show above) was a common sight. Apparently a user ‘Nick Quaranto’ coined a term for this error message ‘Fail Whale’ that quickly caught on. You can read more about the history of ‘Fail Whale’ here

Among a few others, we also tried to leverage this situation to promote a product called Kwippy that we were building. A remarkable thing (Growth-Hack?) that we did to quickly gather attention was let Kwippy users send a Direct Message to their Twitter contacts inviting them to Kwippy. This worked beautifully well and we acquired thousands of users in a month

On a closing note, Twitter has been one of my favourite products on the web. I’ve met some really nice people via Twitter, made great friends and have learned a lot of interesting stuff.

Some Pics from Yesterday’s Tweetup

PS: If you attended the tweet-up and maintain a blog, ping me and I’ll link to it

Last saturday saw the 2nd meet of Social Media Club’s Delhi chapter and I along with Dipankar Sarkar spoke about our experiences and learnings from Building a Global Social Product(Kwippy)  out of India.

I personally was quite excited about the talk as we generally don’t talk about products much in the regular Twitter, Bloggers and other Social Media related meets and I feel this is something that we should do often to create awareness amongst the attendees and if possible encourage people to build new products. 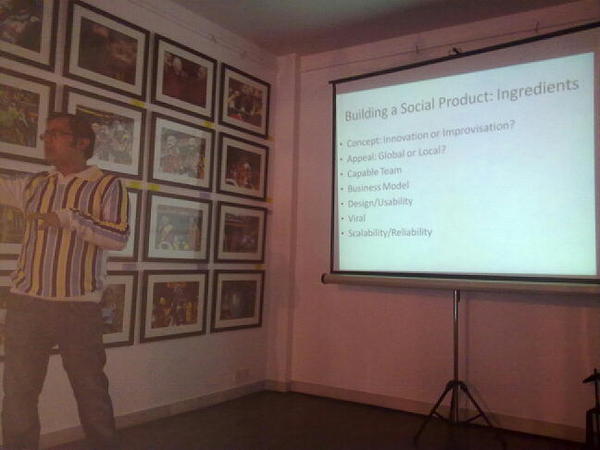 Here’s the presentation from the talk

Talking about web products they can be categorized into two categories, “Innovation” (a completely new concept, first of its kind) and “Improvisation” ( a slight modification in an innovative idea and/or a slight modification in its implementation). From what I’ve observed most social web products in India belog to the “Improvisation” category with focus on the Indian market. Be it a social network, a platform to share pictures or microblog.

Though there is nothing wrong in improvising on someone’s concept and building a product for the local market but I guess most of the products in this segment fail to add any substantial value to the concept or it’s localised execution. Also, what  makes me wonder is why there aren’t many popular Indian web products in other categories particularly Global products based on an Innovative concept(from India) and Global products based on Improvisation(from India) of some innovative concept.

I feel there’s a lot of scope in both Made in India, for India and Made in India for World categories and I would keep a close watch for products in these two categories and now that I have moved out of Kwippy(will detail out in a seperate post) maybe work on something myself sometime soon 🙂

After being nominated and nicely received for Tata Nen’s Hottest Indian Startup Awards and being Featured in Economic Times, Kwippy has made it to India’s 25 Hot Web 2.0 Startups list compiled by Cyber Media group’s Dataquest magazine. Dataquest is a premier IT magazine and has been in circulation for many a years now.  Many Thanks to them for including kwippy in their list

This btw is one of the best descriptions that I’ve read about kwippy and hey there’s a mention of “Slideshare” there too. Also, this would be the first appearance of “yours socially” in print media 🙂

Our chat bot is about an year old and has been running quite smoothly. The bot support the following functionality

Combined together these six features give a lot of power to the chat bot and this is not it, we’ve got plans for some more fancy things.So stay tuned 🙂

We all love reading books and talking about them but at times we just cant get ourselves to read regularly or find someone to discuss the books we just read with. Keeping this thing in mind and kwippy’s wonderful conversational abilities, we’ve started a book club at kwippy. The concept is simple, a bunch of people mutually decide on a book, give it a read and share their views/opinions about it. The slight difference is that instead of discussing books in person, we’ll be talking about them online on kwippy. This will not only help us have better organized conversations but also to involve more people from across the world.

What better book to start the kwippy book club than Milan Kundera’s – The Unbearable Lightness of Being.

If you are into books, you are most welcome to join the book club. All you need to do is request for a kwippy invite here and start following the conversation thread mentioned below. In case you want an invite for kwippy, you can also drop a comment below

If you’ve read the book already, you can also share how did you find it.

Update: If you were looking for an online version for “unbearable lightness of being” you can find it here http://bit.ly/ebkkw Thanks lockerhaxor for sharing the link.

I am talking about my relationship with “Google Reader“. As much as I love reading blogs I’ve never really got too much into using RSS readers to follow blogs I like. That said, I started using Google Reader more actively a couple of months back, reading posts, sharing them and even favoriting some(do you actually go back and read what you starred ?). Things were fine till I was just following 5-7 blogs but once that number crossed a dozen, things started becoming difficult. I know, anything less than 40-50 blogs on the RSS reader is not a problem with many and some can even manage reading(or just manage) 100’s of blogs in their reader but incidentally “reading blogs” is not that only thing I do and thus have a  problem keeping track of large number of blogs and using another tool for it all together.

I happened to skip checking out my reader for a weekend(while out of station) and had a really tough time getting back following it regularly. While I was not doing any good at being regular reading post from blogs I like and the things my friends share this happened. I’ve made good friends with my gtalk and gotten it to do all sorts of things thanks to our kwippy gtalk bot. It’s been a regular affair now to check my google reader once-twice a week and to quickly glance through the new items and the way things are going I have a hunch that despite all its goodness I might just have to stop using it all together as now I can get new posts from blogs I like or what’s being said about social media marketing on twitter delivered straight to my gtalk which is nothing short of spectacular.

Checkout this cool remixed video made by kwippy user lockerhaxor on the kwippy hat he got.

If you are interested in following the latest updates on recent blasts and the current situation in Mumbai via your gtalk.

Our prayers are with people of Mumbai.

Twitter’s Track feature was one of the features which could easily classify as the “Holy Grail” of microblogging. Ever since it was released people loved it and couldn’t get enough of it. Tracking keywords that you care about and getting tweets containing them on your IM(and mobile) was simply terrific. But then like all the good things Track too came to an end. Folks at identi.ca tried doing track but that too ran into some issues and thus had to be taken down.
For those who’ve missed tracking twitter on their gtalk there’s a good news. We at kwippy have found a way around to track twitter via gtalk, just like before. So be it your field of interest, the film you like most or simply your name, now you can get notifications on your gtalk everytime somebody mentions them on twitter.

How it works ?:
Summize/Twitter search gives an atom feed for search results which can be integrated to kwippy, which has the ability to send updates/kwips via gtalk. Which means everytime the feed gets refreshed with new search results
the people who are following the user on gtalk will get the kwip.

Checkout: http://kwippy.com/obamabuzz , this user tracks all the tweets from twitter which contain the word obama.

If you want to track something from twitter on your gtalk, reply here with the keyword(s) and your kwippy username.

If you like kwippy and what we are doing please nominate us for Mashable Open Web Awards. All you need to do is to just enter your email id in the form below and click the link in confirmation email that you’ll get. Come on guys show your support. Also, just drop a comment below if you vote.