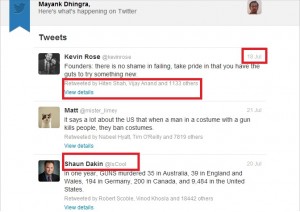 The easiest, most straightforward way to create a great product or service is to make something you want to use. That lets you design what you know—and you’ll figure out immediately whether or not what you’re making is any good. – Jason Fried & DHH in Rework

“Scratching your own itch(SYOI)” is a popular phrase amongst many startup circles. What it essentially means is to build something that solves a problem you face. The case in point cited by many is the fact that when you are solving your own problem you know what exactly the problem is and how it can be addressed while on the other hand if you are scratching someone else’s itch you are sort of taking blind shots at both the problem and the possible solution(s).

While SYOI might have it’s own benefits, it certainly isn’t the only way out for entrepreneurs and not every invention/business is born out of it. For ex: A closed social networking platform for Chief Executives (CEO’s, CXO’s etc) of Fortune 500 companies built by 24-25 year olds can still work or a dating platform built by a married man is no less likely to work because he’s not scratching his own itch {assuming he’s not interested in finding himself a date through this platform 🙂 }

Also, not all’s good with SYOI and it also has its fair share of negatives

S0 are you scratching your itch or someone else’s? How’s it going?