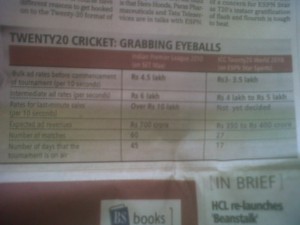 Call it generalization but I’ve always felt that Customer Service is just lip service for most small and big companies in India. The bigger they(companies) get the ridiculous their customer service becomes. Talking about customer service or its non-existence brings me to Aircel.

Aircel is a joint venture between Maxis Communications (Malaysia) and Apollo Hospital Enterprise Ltd (India) and has more than 18 million subscribers(source: wikipedia). Those in India would remember Aircel from its awkward tune and TV ads starring Indian cricket team captain MS Dhoni which were aired endlessly for months. Aircel apparently has a 200cr media budget and it shows by their massive ad spend both offline and online. Aircel is a typical case of  The TV-Industrial Complex which goes like

While they maybe doing a a good job at buying more ads and getting more subscribers I seriously doubt if they are doing any good beyond it. In case you are wondering why do I think so, here’s the thing.

Last Friday(25th sep) I happened to buy an Aircel connection on a whim. Actually I was out to buy a vodafone prepaid connection for my brother but due to its unavailability we thought of giving Aircel a try and given the plans I was told it definitely looked like a wise decision. The new connection was activated in minutes and I was a happy man but that happiness wasn’t for long. When I reached home (about 5 minutes drive from the Aircel showroom/office) I was surprised to find that phone had no network coverage and putting the new sim in three different cell phones didn’t help a bit.

Freaked that I was I tried getting in touch with their customer service but despite hearing ‘we are keen to talk to you’ messages I couldn’t get through the customer care executives in 4 different(2 by my brother) calls that I made which lasts 2-3 minutes each. While cursing Aircel I thought of checking out their site for a possible solution and got to this page

and immediately sent them an email

As you can see I wasn’t really hoping anyone at Aircel would read that email, let alone act upon it and Aircel lived up to its expectations. However that wasn’t it, I went to their store the next morning (10:30 AM) and got the executive there to register my complaint and on being asked how much time will it take to get it resolved and should I really expect any solution for my problem(I really don’t expect them to put a tower near my locality just because I complained) I was told complaints are addressed in 24 hours and they(Aircel) are installing 10 new sites a month based on customer feedback (like I will buy that).

That was Saturday morning and I waited in vain till evening to get a call on the alternate number I had given (Email reply is obviously out of question). I asked a local shop keeper about Aircel network and he too agreed that their network coverage is quite bad. Without wasting any time I bought a new Airtel connection(which is doing pretty good). Curious to see what others think of Aircel I did a search on Twitter

and a quick search on Google revealed

Now that we’ve seen how bad things are with Aircel one can only wish if Aircel was listening and spending money on building better network/services instead of spending millions on roping in celebrities for lame TV ads.

How has been your experience with Aircel?

PS: Had it not been for a long weekend and some optimism on my side in hoping for a reply, I would have written this post on Saturday itself

Got this email from ICICI bank yesterday about launch of what they call “Tevelision Banking”.  All that the email contained was this image.

To be honest this is the first time I heard the term “Television Banking” and I found the proposition intriguing.

Just when you can’t seem to figure out why are most banks/branches closed on a sunday ? or why a cheque deposited on a Thursday afternoon won’t be credited till Monday morning ?, this innovative new concept from a bank seems cool and definitely useful.

Here’s a visual walkthrough of what happened after clicking the link for online demo.

Did you notice the URL for this page?

This gives you fair idea of what “Television Banking” is all about. Also, the ability to pay your dishtv subscription from your ICICI bank using your TV is definitely useful.

While not everyone might need this, but the sheer thought of banking(though limited) on your TV while lying in your bed at any time of the day, wants you to give it a try.

What do you think ?