Just like “Marketing is too important to be left to the marketing department”, for start-ups

Hiring is too important to be left to the HR department.

In the previous post I talked about ‘Who to hire for your start-up‘. Many of you agreed to most of what I shared so the next question that comes out is how to hire these guys. As @mohak put it brilliantly

Recruitment is marketing. If you can’t hire well, you can’t market well 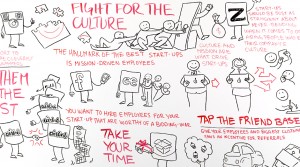 These 10 ways should help you with your hiring. Do share what you think about them and if you have any experiences around start-up hiring that others can benefit from

Update:  Here’s another super geeky way to pick up nerds

I’ve been a regular follower of Seth Godin’s blog and like almost all his posts. However there are some posts of Seth that I like way more than others. A couple posts that really caught my attention a few weeks back were on choosing the customer and training your customers respectively.

It is especially important to choose your customers if you have a perspective/vision and you want things to happen according to that and not according to the terms defined by the market. For example sake, consider two product companies, one of which is very choosy when it comes to picking their customers and would rather prefer a smaller set of customers of the kind that they’d like while the other company is not really that choosy and is open to catering to all sorts of customers, the more the merrier. Assuming they both start from the same point, it won’t be difficult to imagine how differently would shape up after an year into the business. Company A which focuses of select customers will emerge out to be almost on the lines of the founder(s)’s vision while Company B which wants to get as much customers as it wants will have significant difficulty living up to the varied expectations and might just give in to the (un)reasonable demands of the majority.

Not only this, Seth suggests that businesses should also train their customers. Yes, training the customers by encouraging certain type of behaviour by rewards etc and discouraging certain type of behaviour. For ex: If you’ve priced your product slightly above the market standard then there’ll be lots of customers complaining about your price and trying to negotiate their way down(in terms of prices). Now there are two ways to go about it, one that you let customers negotiate and other is to don’t bother. Over a period of time if you follow the don’t bother policy you’ll observe how some price sensitive customers will move out and the remaining customers will get used to the higher than market price and stop complaining (This assumes that their is something that the business  offers to offset the high price).

Another interesting effect that this has is that it helps in building a culture among your customers that’s decided to a large extent by your terms and not the markets.

1) 8 questions to ask before using youtube as a communications tool
2) How Dell is using social media
3) offer scope for employees to exercise their vital powers
4) Kwippy Link: What’s your favorite food ?

A great video presentation by Prof Wesch on YouTube from an anthropological point of view. I particularly liked the parts of talk about YouTube’s community and the website’s culture. As written previously, websites have cultures too , the fact that a good 5% of videos on YouTube are personal vlogs addressed to the YouTube community means something and common trends like remixing people’s videos and replying a video by another video demonstrate how cultures are built and grow. What do you think about the culture  and community on your favorite site ?

Ever wondered why different websites despite being of the same genre
appear/feel differently ? or why your own behavior differs from site to site?

Well the case in point being that all websites across the web consciously or unconsciously develop cultures and subcultures just like it happens elsewhere when a group of people interact with each other over a period of time.

I’ve always felt that people(ones I know) spend a lot of time “filling the profile info” and often even more time “maintaining/updating profile info regularly”. It might be necessary in some cases but if you are just there to stay in touch with people you know its not necessary at all but still lots of people(old and new) tend to do it.

I haven’t used Facebook much so in this regard the only thing that stands out is “Adding new apps” and “Requesting others to use new apps”. Every time I log in there are a dozen new requests to try new apps and that’s probably because this viral behavior has really got into the users and seems no signs of stopping.

How a Culture gets developed:

Culture development is a two way process. While in most cases it comes downwards from the top in some systems(emergent) it rises bottoms up. Generally the culture developed by the initial users of the site continues to grow with more people joining and unconsciously following the experienced users behaviors thereby strengthening the existing culture.

What can you do about it ?

Either you consciously develop a culture “Top down” in a planned/phased manner or keep an eye on the small/mini behavioral usage patterns, facilitate them and guide them upwards. This can be done by say adding new features or re-designing the existing ones to make them more available. I feel the features to “push out profile updates” to friends and in your face options to “invite friends to use apps” respectively have helped a lot in setting the above mentioned trends.

A simple example of “Top down” culture that I can think of(and I’ve used) is say you have a website and you want the users to upload their profile pictures instead of continuing with the default ones. One way it can work is say if all the initial user(100 or so) have uploaded their profile pictures then someone whose new to the site might upload a picture straightaway and it stays the same way going forward.

This behavior is quite natural and common as most new users don’t want to look new/naive/different, gain acceptability and become a part of the crowd so they’ll follow the established behavior without making much noise. However simple and obvious it may sound if it happens right it can do wonders for a site consider a social networking site(a friend told me about) where almost all users have provided their mobile numbers despite them not being mandatory. Sounds scary but then its not impossible.