The results are out and the winner is ‘Aam Aadmi Party’. A start-up that growth hacked itself to become the second highest seat winner. Here is how 2 exist polls compared to the results 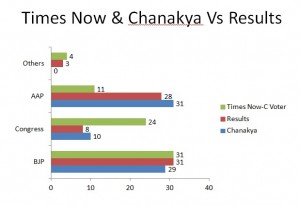 While Today’s Chanakya Exit Polls data were closest to the results, Times Now (except for their spot on BJP Exist Poll data) are way away from the results. Good Job ‘Chanakya’ !!

Blogosphere and Twitterville are abuzz with the news of recently launched blog of  prime ministerial candidate Mr L.K Advani of the India’s opposition party, BJP.  Be it the Obama effect or something else, it’s good to see Indian politicians starting to use Internet actively.  Clearly, BJP is coming out stronger and smarter when it comes to making their presence felt on the web as compared to the Congress.  Also, there seem to be an aggressive effort in marketing Mr Advani on the internet too. Lets see how Mr Advani and team are using various social media tools and services to spread the word.

1) Personal Web Site: The website http://www.lkadvani.in/ as Gaurav Mishra notes, was launched on November 8, 2008.  The site is much better than the kind of sites we’ve seen in the past . Not only does it look better, it is also well conceptualized(though there’s nothing out of the box yet).
Things worth noting about the site are
a)  Comprehensive about and background page(s): This is very important for those who want to know more about the leader and/or the party. That said, the site offers a lot of relevant information.

b) Forum: The site also has an active in house forum, with a couple of threads having more than 100 posts. Having a forum is very important to organize a loyal community around the social media object in question. If handled properly a forum like this could grow really big and attract lots of politics enthusiasts engaged in various sorts of discussions. What remains to be seen is if Mr Advani, himself takes part in this forum.

c)  Blog: A blog in another way to share your views/opinions and engage the community. A few questions that comes to one’s mind immediately are,  who writes the content ?  how open are they to feedback/criticism ? and who replies to the comments i.e engages in conversations ?
Since the blog is just a few days old, its difficult to answer these questions now.

d) Recent activities: It’s good to see, details about his standing and statements on currently relevant issues on the home page of the site.

e) Open to suggestions/feedback: There’s good enough and visible focus on asking for user feedback and suggestions. How they are dealt with it however is a separate issue.

f) Alerts: Email and SMS alerts about breaking news. Sharing things first with the community is a great thing to do and it gives people enough incentive to subscribe for these alerts.

2) Google Adwords Campaign: Though this doesn’t come under social media per se but there is also an active Google adwords campaign, not just for keyword search but also contextual advertising. Smartly enough they’ve even bought ads for keyword “congress”. So if someone searches Google for “congress” they’ll be seeing an ad like this

Some other keywords and phrases bought are “l k advani”, “lk advani” and bjp. Incidentally SBI folks are even smarter for they too bought ads for the keyword “l k advani”. Here’s what their contextual ad looks like

These are some of the aspects of Mr Advani’s internet campaign that I could discover. The campaign is focussed more on depth than on width for now and that’s the reason there’s a lot of focus on the website and almost zero focus on other social media tools. A couple of interesting and simple things they can do are

1) have videos of his speeches uploaded under an official youtube channel, so that more people can see them and know more about him and his viewss.
2) Have an option to vote for or against his stands on various issues. This could help them understand what’s the popular opinion for netizens about his stands.

Even if they decide to focus on just the site without doing anything fancy, they can get a lot of attention and earn goodwill by just spending more time conversing with the users/visitors.

Mr Advani’s experiments with the internet should serve as an example for other politicians from India, especially the younger ones and hopefully 2009 will see more politicos finding their way to the internet.

Today Delhi went for assembly polls. The turnout for polls should apparently a bit higher because of recent attacks on Mumbai and high voter turnout in Kashmir and even far off US(I think it’ll effect some people). This was the second time since I turned 18(voting age) that I went to caste my vote considering it my responsibility and having faith in democracy though being skeptical about the election candidates.

Keen to caste my vote I went to vote the first thing in the morning. I was told that cell phones are not allowed inside the premises so I left them at home and picked my Voter ID and a voter slip which had details like voter number, voting center etc. I was joined with a friend and we walked down towards our polling center( a school nearby). The police constable at the gate told that phones are not allowed and we replied that we were not carrying any, which he believed easily and let us in without frisking. Apparently frisking people which is common place in metro trains, shopping malls etc is not really necessary at a polling center.

Upon reaching the room in which we were supposed to caste our votes I was surprised to see two gentlemen from our apartment seated with the voter list from our society and marking who all are turning up to vote. I certainly did not expect to see them or any familiar faces in there(on asking a friend I was told that they are supporters of two main parties and are on some sort of duty to ensure fairness). Next step was to mark my attendance their and getting marked by ink to certify that I’ve voted and to ensure that I can’t vote again. Here also, the lady on duty was marking ink on people’s middle fingers only to be told by a gentleman(who apparently came from the adjoining room) that she is supposed to mark ink on the index finger.

The last step was to caste vote on an electronic machine, which I did eventually but couldn’t help feeling really bad about the whole set up and their unprofessional approach. If we can do our duties responsibly why can’t they ?

Yesterday evening saw our local MLA “Jai Bhagwan Agarwal” paying a visit to our apartment/society. It was the first time ever that I was present while someone contesting elections came for a visit as a part of his campaign. It was a different and funny experience. Till now i had seen more campaigning for elections on film and tv then in real life. The cavalcade of the minister was proceeded by various people playing drums, holding banners of BJP and shouting slogans for their leader. Want to know their slogan for this time ?

” Rohini ka Obama kaun ? Jai bhagwan Jai bhagwan ” –
Yes, you had to be there to believe it 🙂 Apparently they’ve been using this slogan all around the place.

After the MLA met his supporters who had come to greet him there took place a ritual (which as expected I had no clue about). Its one of those things that are apparently a regular affair around election time. The MLA weighed on a weighing balance and his biggest supporter and friend (a resident of our apartment) donated bags of 1 Rs coins that equaled his weight. I am told its a way to show one’s respect and trust.

Noise and people settled a bit after this and Mr agarwal spoke a few cliched words about how the residents of our apartments are important, how supportive they have always been and we’ll continue doing good things etc etc. The speech(if it can be called) lasted for five minutes before the procession moved to the next apartments leaving behind a few delicious sweet dishes to be circulated among those who had gathered

“Email is not one of the things that comes to one’s mind when it comes to social media marketing. A world where shiny web 2.0 objects like facebook and twitter are at the center stage most people tend to think a bit too less of the classic email and the possibilities it offers. Lets see how Obama and his team leveraged the power or email to the hilt.”