In the year 2013 I swiped card/availed COD across Flipkart, Jabong, Myntra, Amazon etc. Here’s quick glance of my purchases 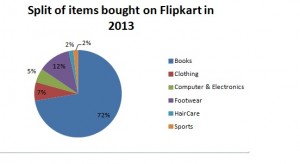 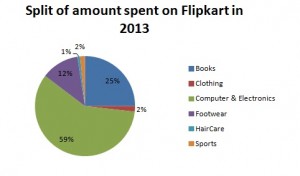 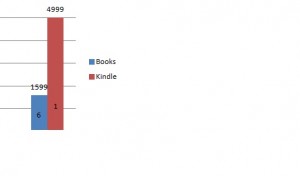 Purchased a clothing item worth Rs 1280 during GOSF

A peak into my mind as an online shopper
1) Convenience very important but not more important than discounts. Moved my bill payments online. I do all my bill payments and DTH recharges on Paytm
2) Almost all my purchases have been via desktop (haven’t got myself to buying things via apps/mobile site yet.)
3) I’ve crossed the chasm from COD to swiping cards. I now prefer to pay online for most of my purchases. I don’t hesitate to swipe card for my first purchase on sites I’ve heard good deal about (Myntra, Jabong, Shopclues etc). Earlier my first purchase on a new site was on COD
4) I got comfortable enough to made a big ticket purchase (bought a laptop for around 30K from Flipkart)
5) Discounts/Offers have an influence on my purchase behaviour (both on pre-decided buys and impromptu purchases). I spent some
6) I trust most sites to deliver goods on time, offer quality goods and a customer friendly return/exchange policy
7) Flipkart’s scan (barcode) and search feature is quite handy for a quick online vs offline price comparison
8) I’ve grown to compare prices across sites before buying anything. I definitely use mysmartprice to compare book prices
9)  Wishlists and notifications are a great way for me to store items and decide when to purchase
10) As a heavy user I’ve figured some hacks to avail the max discount on certain items across some sites;-)

Ego searches on Google aren’t uncommon and one of the most recent ego searches made me notice something unusual.

Yes, that’s an ad by Facebook for the name “Mayank Dhingra”. Out of curiosity I made a random India name search and

Sure enough Facebook is upto something, A couple more random searches on Indian names confirmed it

Looks like Facebook has taken a lot of Indian names(random?) and bought Google ads for them. A SEM trick to get more traffic and signups?

After being nominated and nicely received for Tata Nen’s Hottest Indian Startup Awards and being Featured in Economic Times, Kwippy has made it to India’s 25 Hot Web 2.0 Startups list compiled by Cyber Media group’s Dataquest magazine. Dataquest is a premier IT magazine and has been in circulation for many a years now.  Many Thanks to them for including kwippy in their list

This btw is one of the best descriptions that I’ve read about kwippy and hey there’s a mention of “Slideshare” there too. Also, this would be the first appearance of “yours socially” in print media 🙂

Blogosphere and Twitterville are abuzz with the news of recently launched blog of  prime ministerial candidate Mr L.K Advani of the India’s opposition party, BJP.  Be it the Obama effect or something else, it’s good to see Indian politicians starting to use Internet actively.  Clearly, BJP is coming out stronger and smarter when it comes to making their presence felt on the web as compared to the Congress.  Also, there seem to be an aggressive effort in marketing Mr Advani on the internet too. Lets see how Mr Advani and team are using various social media tools and services to spread the word.

1) Personal Web Site: The website http://www.lkadvani.in/ as Gaurav Mishra notes, was launched on November 8, 2008.  The site is much better than the kind of sites we’ve seen in the past . Not only does it look better, it is also well conceptualized(though there’s nothing out of the box yet).
Things worth noting about the site are
a)  Comprehensive about and background page(s): This is very important for those who want to know more about the leader and/or the party. That said, the site offers a lot of relevant information.

b) Forum: The site also has an active in house forum, with a couple of threads having more than 100 posts. Having a forum is very important to organize a loyal community around the social media object in question. If handled properly a forum like this could grow really big and attract lots of politics enthusiasts engaged in various sorts of discussions. What remains to be seen is if Mr Advani, himself takes part in this forum.

c)  Blog: A blog in another way to share your views/opinions and engage the community. A few questions that comes to one’s mind immediately are,  who writes the content ?  how open are they to feedback/criticism ? and who replies to the comments i.e engages in conversations ?
Since the blog is just a few days old, its difficult to answer these questions now.

d) Recent activities: It’s good to see, details about his standing and statements on currently relevant issues on the home page of the site.

e) Open to suggestions/feedback: There’s good enough and visible focus on asking for user feedback and suggestions. How they are dealt with it however is a separate issue.

f) Alerts: Email and SMS alerts about breaking news. Sharing things first with the community is a great thing to do and it gives people enough incentive to subscribe for these alerts.

2) Google Adwords Campaign: Though this doesn’t come under social media per se but there is also an active Google adwords campaign, not just for keyword search but also contextual advertising. Smartly enough they’ve even bought ads for keyword “congress”. So if someone searches Google for “congress” they’ll be seeing an ad like this

Some other keywords and phrases bought are “l k advani”, “lk advani” and bjp. Incidentally SBI folks are even smarter for they too bought ads for the keyword “l k advani”. Here’s what their contextual ad looks like

These are some of the aspects of Mr Advani’s internet campaign that I could discover. The campaign is focussed more on depth than on width for now and that’s the reason there’s a lot of focus on the website and almost zero focus on other social media tools. A couple of interesting and simple things they can do are

1) have videos of his speeches uploaded under an official youtube channel, so that more people can see them and know more about him and his viewss.
2) Have an option to vote for or against his stands on various issues. This could help them understand what’s the popular opinion for netizens about his stands.

Even if they decide to focus on just the site without doing anything fancy, they can get a lot of attention and earn goodwill by just spending more time conversing with the users/visitors.

Mr Advani’s experiments with the internet should serve as an example for other politicians from India, especially the younger ones and hopefully 2009 will see more politicos finding their way to the internet.