Just a quick warning to folks reading this that there’s a Phishing email doing that looks like it’s from the Indian Tax Department is doing rounds. The email text reads 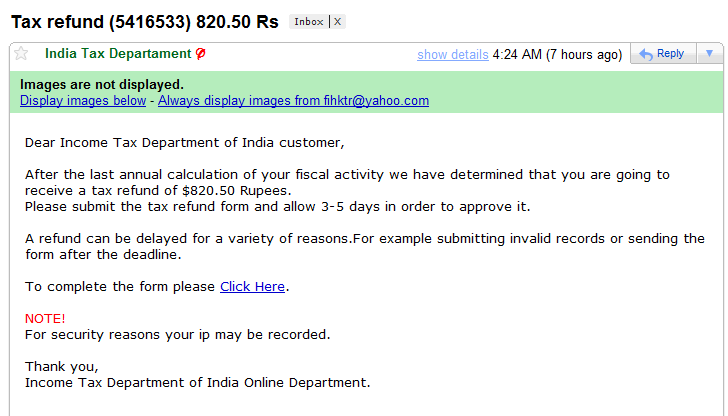 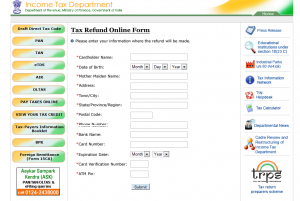 and it was only when I saw the card number and card verification number that it occurred to me something’s not right here. On close examination things started to fall out of place. This page is a cleverly devised one and can make a lot of people fall for it unless they are alert enough. The right side pane have links to actual sites and the look is a complete rip off from an official site. While this might be a clever attempt it isn’t perfect and here’s why(keep this things in mind for similar situations)

1) Asking for Card Number and/or Pin: If anyone needs to transfer money to you, all they need is your name, your bank account number and branch. There isn’t any need for a credit/debit card number and pin

2)  Non Clickable Icons/Links: On trying to find where various links on the sites are pointing out I realized that left pane is just an image and not an html section with actual links, the same holds true for the footer which looked genuine but is just an image

3) Generic Name: On a closer look you’ll realize  that all the text from email to the web page is not being addressed to you or anyone in particular. It’s just a generic text like ‘Dear Applicant’ and a silly ‘Dear Income Tax Department of India customer’  for email

4) URL: The site URL could be a great pointer in Phishing cases and the URL here (http://indiataxrefdep.com/folder/) reveals that something isn’t right here. When was the last time you accessed a government site which had ‘folder’ in it’s url?  Also, aren’t government sites on the ‘.gov.in’ domains?

5) Email Sender: It’s really important to check the sender email id of such emails(which I didn’t check in the first place to be honest). On second thoughts a quick look at the email id would have cleared all doubts, the sender email was ‘fihktr@yahoo.com’. Yes, an Income Tax Department email coming from a yahoo mail id.

These five tips should be helpful in figuring out if an email is a Phishing attempt or not. Feel free to add more points to the list.

I had written a similar post to avoid being Phished on Facebook, you can read it here 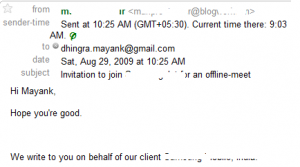 Yesterday a friend of mine, whose not into Twitter at all forwarded this mail to me

Yes TwitterTrick can work for you, and you’ll quickly discover that it’s easy if it’s all lined up for you,
and you have a quick action plan that s simple to follow…

But you don’t have to fear listbuilding anymore, because the new techniques, and the new social media have made it easy for us…

You don’t have to worry about listbuilding anymore!

Your list will start growing immediately, even while you sleep!

$ You don’t know what an autoresponder is…

$ You’ve never sold anything online before…

$ You can just barely answer your email…

And you have nothing to fear, because you are covered by my “no hard feelings” guarantee, because I just wont have any unhappy customers, if you aren’t happy with this book, in 60 days time, and you didn’t grow your list, and you gave it an honest try, I will happily refund you your money, check it out right now…

Bundled with this offer, get

There is a lot more to know about it. CLICK HERE

So what do you think about the “Twitter Trick” ?

You know something isn’t write when #hiring is a trending topic on Twitter, especially when it’s Recession Time. That’s indeed the case. A quick click on the keyword confirms that, here’s what the search page of #hiring looked like

Out of curiousity I checked out the search page for the next trending topic i.e #tweemyjobs and here’s what I got

Yes, these two trending topics have been compromised/rigged/spammed and apparently there isn’t a genuine reason for them to be popular except for these bots. Also, if you take a closer look at the tweets here you’ll realize that the words contained in the kwip match the trending list, one for one. HOLY SHIT !! The whole trending list has been screwed badly. So as I write this post millions of users will be seeing the list of engineered topics spammed into attention. What this means is that it’s damn easy to turn the trending list upside down.

Thinking about this makes me wonder how come there aren’t any checks in place to catch hold of such things and control them ?

Not only this, there are other(un-related) people who also want to cash in on the eyeballs the trending topics get and to attain that goal they start using trending topics randomly in their posts to earn some extra clicks. For ex: the one’s here

Screenshots of searh results for other trending topics dollhouse, wolverine, imax and giro

Sad but true, the integrity of  Twitter’s trending topics has been screwed.
Let’s see how this incident effects the bigger picture.

ps: excuse me for these hatrick posts on twitter, it’s just a coincidence and twitter got lucky

These two “S” words are not often used in the same sentence but I had to use them. Everyone hates getting spam but not everyone hates sending spam. I too like most others get a daily quota of spam in my email account despite the spam filters. While most of those spam emails don’t generate any bad feelings because I simply choose to ignore them there’s this category of spam which I can’t help feeling bad about. This category of spam originates not from shady people selling enlargement creams or Viagra pills but from people who actually own and run less or more popular companies/sites. Most of the spam emails that I get from the category mentioned above are from various early stage startups based out of India(except wayn) so it seems like spamming people in such a way is a trend more popular in India only.

“Hi
Someone close to you had invited you to join www.xyz.com
Please visit www.xyz.com and register, you may win an illuminated t-shirt.”

“Your friends have been inviting you to join www.xyz.com”

“A friend of yours provided us with your email address and suggested that you would be open to provide 2 minutes of your time to support a startup company engaged in a worthy mission.  We have been nominated in the TATA NEN Hottest Startups contest.  We are writing to request you to vote for us.”

“worthy mission” was it ? Not sure if anyone who gets this spam email would vote for them, I certainly won’t(despite the fact that I liked the site’s interface when I looked at it for the first time)

I fail to understand why these sites/companies have to resort to such stupid ways of spreading the word. Why why why ? Firstly, I am not a big supporter of mass emails, for I am not really sure if they do more good than bad and secondly if you have to (for whatever reasons) mass email people keep in mind the following things

1) Don’t address it to everyone.
Hi all, Dear all etc are a not a good way to start an email which is not addressed to a known/close group. They look spam from the word go. I’d rather read a mail which reads “Hi Mayank” or at least a “Hi”.
2) Don’t use vague referrers:
“A friend of yours”, “Someone close to you”, “Your good friend” or something weird like this is sure shot sign of a spam email. If you have a referer name use it else don’t pretend to act genuine because this just doesn’t work.
3) Make the text interesting:
I won’t mind reading a random email if its written properly and maybe a bit witty. It should be a run of the mill promotional email.

That said, I’d like to advice startups(and others) to not bombard random people like this as it might give you small returns but it most certainly will piss others off which might have been neutral towards you otherwise but now think of you as evil/lame.  No points for guessing what image I now have for the startups who sent me those spam emails.